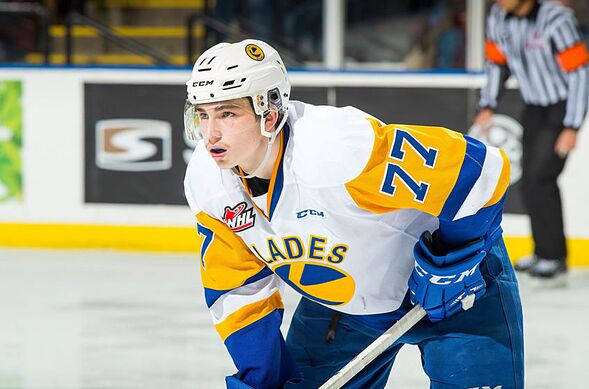 KELOWNA, BC – DECEMBER 01: Kirby Dach #77 of the Saskatoon Blades lines up against the Kelowna Rockets at Prospera Place on December 1, 2018 in Kelowna, Canada. (Photo by Marissa Baecker/Getty Images)

With the draft lottery balls landing in favor of the New Jersey Devils on Tuesday night, speculation now begins of who teams will be selecting June 21st at the 2019 NHL Entry Draft in Vancouver. The Oilers will have plenty of options at number 8, and we are going to look at which players would make the best draft options on draft day.

I don’t think I need to explain the apparent weaknesses of the Edmonton Oilers rosters; gaps that could be recognized and targetted in this draft with the loaded amounts of scoring wingers available in the top 10 range.

With that said, if the Oilers were somehow given a chance to take defencemen, Bowen Byram of the Vancouver Giants, I’d jump all over that and solidify the teams d-core moving forward. However, I don’t think there is any chance he falls to number 8.

Like I said though, there is a variety of scoring wingers available that could be the answer to the missing piece in the Oilers top-six forward group. Many of which should be available at number 8. So let’s jump into the best options for the future of the Oilers Franchise:

Next: Prospect No. 1
Next1 of 6Prev post
Use your ← → (arrows) to browse
Load Comments
Event Tickets
Powered by StubHub
Top Stories